Taking Panoramas on the iPhone

Taking Panoramas on the iPhone

Sometimes, a great scene just won't fit in the space of the 4:3 iPhone sensor. What then?

The iPhone includes a great feature for capturing wide, sweeping vistas with the Pano, or panorama mode. The Pano mode stitches several images together side by side, leaving you with a wide image that captures the entire scene.

While operating the pano mode is rather simple, getting a great panorma from your iPhone involves a few tricks and sometimes some troubleshooting. The pano mode is also a nice way to get a bit creative with unusual motion panoramas.
How To Shoot a Panorama on the iPhone

The native iPhone camera app has a panorama mode built in, on iPhone 4S and later models. On the mode slider above the shutter release, slide over from PHOTO to PANO. Your screen will change, adding an arrow with the instructions "Move iPhone continuously when taking a Panorama." On iOS 9, that screen looks like this: 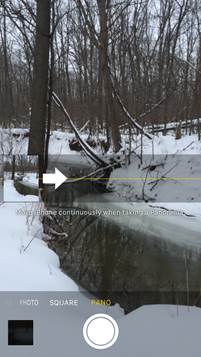 Before you shoot, decide on your composition-what do you want in the photo and what should be left out? Make a mental note of where you would like the image to start and stop. Then, holding your camera vertically, point the camera to frame the edge of that image you have in your mind. You'll be moving the camera in the direction the arrow is pointing-if you want to switch directions, just tap the arrow.

Once you press the shutter release, sweep the camera around to capture the entire view. The iPhone is very intuitive here-the on-screen instructions will help by telling you if you are moving the camera too fast. Try to hold the camera straight as you move without adjusting up or down-you'll want the white arrow to stay on the yellow line.

A traditional panorama is horizontal because wide, sweeping landscapes are often the best subjects for panoramas. But, vertical panoramas can be a useful tool as well. Instead of holding your camera vertically, turn it on it's side, like you would to take a horizontal picture. Identify where you'd like the image to start and stop. Start at the top of that image and position the camera so that you can see your starting point. Press the shutter release and then simply move the camera down instead of to the left. Try to keep the camera as still as possible.
Want to learn more? Take an online course in Digital Photography with the iPhone.
Using Panorama Apps
The pano mode on the iPhone is excellent and one of the better features inside the native camera app. However, there are a few scenarios that the pano mode falls a bit flat on. The built-in pano is limited to about 180 degrees, not full 360. Standing still is necessary for getting a pano without odd glitches, but that also makes the images more prone to perspective errors. There are a few apps that can help fix those problems, Panorama. by Limit Point and DMD Panorama by Dermandar are two solid panorama apps.
Panorama by Limit Point

Unlike the pano mode, the Panorama app by Limit Point allows you to take single photos, then use the on-screen guide to line up the next image. While the app has some limitations, it's free and corrects some of the perspective errors, where straight lines appear to tilt, in the native camera pano mode. 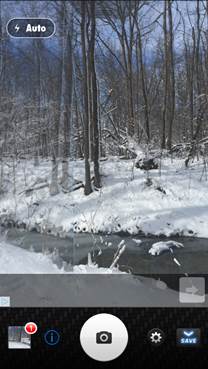 Determine where you would like the panorama to start, then tap the shutter release. The app will record the image, then display a transparent section of that image to help you line up the next shot. Instead of only moving your camera, this app works best if you move your feet. Try to move in a parallel line over, so that you are the same distance from your subject. Move to the right until you see the first image overlap with the next section. Once they start to line up, pause and try to get the two images to line up as closely as possible. Once they line up, hit the shutter release to take the next photo. Repeat these steps until you've captured the entire view. Then, click save on the bottom right to merge the photos together.

By default, the app limits panoramas to three photos, but you can change that in the settings. Tap on the icon towards the bottom that looks like a gear and use the photo limit slider to increase the number of photos you can stitch together. The more photos you stitch together, the larger the file will be-which means more resolution, but slower processing. Under this setting menu, you can also access options to blend the exposures together better as well as how much overlap from that previous image that you see on the screen.

The ability to take panoramas without those perspective errors is this app's best feature. But, there are certainly a few flaws. The app doesn't do well blending the exposures together, so your panorama needs to have relatively even light across the entire scene. Taking panoramas in a room with a window for example, you'll see an obvious diagonal edge from the different exposures as you move closer or farther from the window. The images can also be harder to line up, even with the on-screen guide, making it more prone to ghosting.
DMD Panorama

Unlike the Pano mode and Panorama, DMD panorama creates interactive 360 degree panoramas. While a typical panorama could be printed on the wall, Panorama DMD instead creates a 360 degree image that you can swipe through to see the entire perspective, like a 360 degree reality. 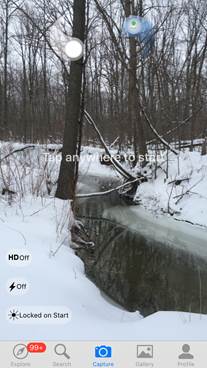 DMD Panorama is also simple to use. To take a panorama, you'll need to tap the camera icon in the bottom middle for the shooting mode. On the bottom left, you can turn HDR on and off, or turn the flash on. The option with the sun icon is for exposure-you can use auto, or lock the exposure so that it doesn't change in between shots as you circle around.

To start shooting, tap the anywhere on the image. Then, move to the the left of right. When you see the ying-yang come completely together, pause and the app will automatically take another image. Continue turning and taking the picture until you've completed an entire circle (the icon in the ying-yang will appear green). Once you've finished, you can save and share the image. If you tilt your phone horizontally, you can turn the phone to view each different perspective of the 360 panorama.

The DMD Panorama takes a panorama that can be used as a virtual reality to swipe through. The interactive panorama can be shared with a link to enable the swipe feature to change perspectives, or, you can export as a video that turns through the entire image. To view the sharing icons, go to the gallery (located on the bottom), select the image and click the arrow to view the different options.
Troubleshooting Panorama Errors

Since a panorama is several photos stitched together, they're more prone to error and odd image glitches. But, most are easy to correct. If you see:

Getting Creative With Pano Mode

The pano mode is a great feature, but it also lends itself to a few camera tricks that you can pull off without any editing.

In Photoshop, you can merge multiple images so that one person appears several times in the same image. You can achieve the same effect with the pano mode. Start with the person frozen in a position and slowly start to pan. Once you've passed them, have them run around behind you to the other side and freeze in another position. The key is for them to run fast enough (and for you to move the camera slow enough) so that they can get into the second position before you've moved the camera over that spot. While it takes some speed and a few attempts, it's a fun way to create a "twin."

Anything that moves during the pano mode will get distorted-but that can lead to some fun shots as well. Try moving the camera at the same speed as the subject moves-then have them freeze at the end. You'll end up with a streak ending in that frozen position. Odd? Sure, but it's another one that's fun to experiment with.