It's important to remember that lookup functions require two columns (or rows when using HLOOKUP). The first column is searched for a given value, and then the adjacent cell to the right of the column is the data used to either calculate a result or just display the lookup result in the spreadsheet. These lookup functions make it easier to find values among hundreds (even thousands) of records in a spreadsheet instead of searching for a value using a simple file search. They also provide a way to perform a lookup and display data dynamically should the value in the lookup column change.

VLOOKUP (<data to search for>, <cell range to search>, <the column number in the cell range to return after a match>, [OPTIONAL]<return only an exact match>)

The result from a VLOOKUP can be used in an additional calculation, or you can simply display the result in the selected cell. VLOOKUP only uses columns to search for data, so any values used in the function's parameters will base a search on columns not rows. 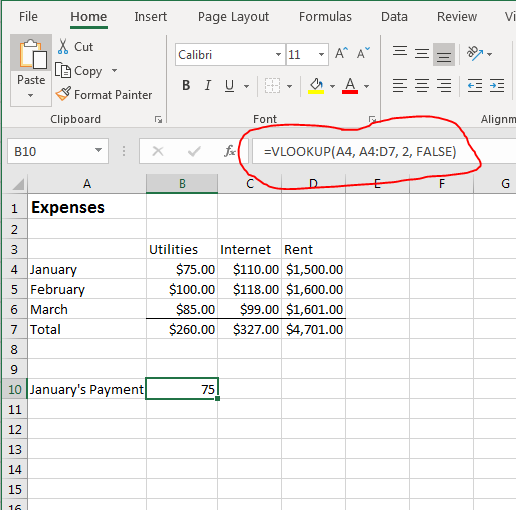 Using the "Expenses" spreadsheet, you can use VLOOKUP to find a value in any month's record. This spreadsheet only has a few records but imagine having a spreadsheet with several years of data. Scrolling through all records could be time-consuming, and you could miss values by just doing a quick review. The VLOOKUP function can be used to highlight all records and perform an automatic lookup.

In this example, VLOOKUP searches all records for the "January" string. This example uses the A4 cell reference, but you can also use "January" in the first parameter instead. Static values are usually frowned upon, because changes to the cell are not dynamic with other functions n the spreadsheet. The second parameter specifies the range of cells to search. The third parameter tells Excel which adjacent cell in the row to use. The second column is the "Utilities" field, so the VLOOKUP function retrieves the $75.00 payment from the lookup. For instance, if you entered "3" for the third parameter, the VLOOKUP function would return the "Internet" column payment of $110.00.

Excel lookup functions provide a way to return values that approximately match a search. If you want this type of search, you would use "true" in the optional fourth parameter. The issue with approximate searches is that you don't get a precise return value. Similar searches should be used with care to avoid errors in your calculations, so it's best to use the "false" option as the fourth parameter.

VLOOKUP performs searches based on columns, but the HLOOKUP function gives the opposite type of search using rows. The parameters and syntax for HLOOKUP are the same, except instead of specifying the column from the left side of the selected cell range, you use parameter values that specify the row cell that you want to return from the top of the search range. 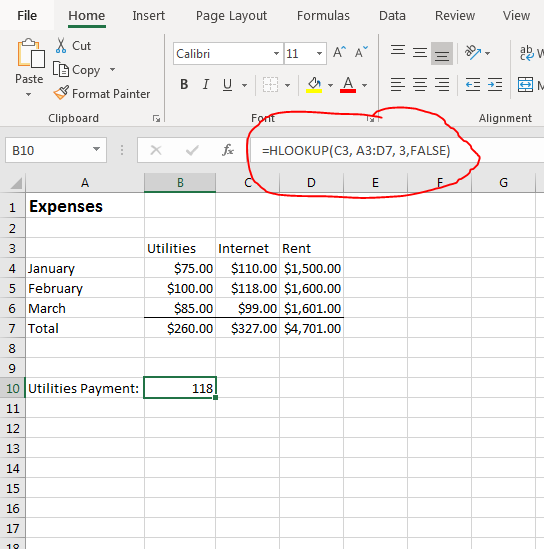 For this example, the same range of cells is used to search for the "Internet" payment for February. You aren't limited to the first row after the main lookup row, so this example shows you that you can return the value several rows below the main header row.

Instead of basing a search on columns, this HLOOKUP performs a search on payment records for each type. The C3 cell contains the value "Internet," so the lookup finds the cell with a value of "Internet," and then it returns the value in the Internet column that is three rows down from C3 (including C3 that Excel 2019 allocates as row one). In this example, the value in the "Internet" column three rows from the C3 (including the C3 row) cell is $118.00.

Interested in learning more? Why not take an online class in Advanced Excel 2019?

If you attempt to perform a lookup using an approximate match with data that is not in ascending order, Excel returns an #N/A error. 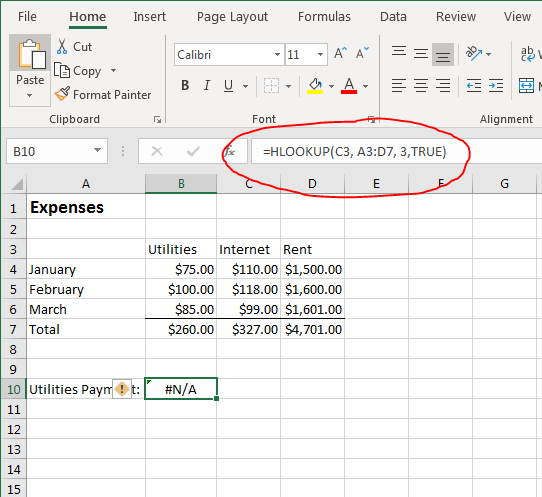 If you see "#N/A" shown in a cell with either a VLOOKUP or an HLOOKUP, you know that you must switch the approximate search to an exact match by changing the parameter to "false."

The LOOKUP function works similarly but has different requirements and results. Microsoft suggests that users should use the LOOKUP function when you only need to only search one row. This method is called the vector form, and the result displays the first value found in the row or column. The array form lets you search additional columns and rows, but the search feature is much more limited. Microsoft recommends sticking to the two alternative VLOOKUP and HLOOKUP functions when you need to search multiple columns and rows.

The syntax for the LOOKUP function is as follows: