My Classes
The Process of Value Stream Mapping in Lean Management

The value stream refers to all processes and actions taken – both value and non-value adding- to convert raw materials into a finished product or deliver a service. Value stream mapping is a visual tool that aid businesses to plot all the tasks needed to receive an order from the client and satisfy it. It offers the visual means to;

1. Current State VSM – used to show the characteristics and current state of the business's value stream.

2. Current value stream – use to depict the desired future state of the business's value stream, if measures were taken to smoothen flow, shift from push based production system to market demand (pull-based) production and, to reduce waste.

In lean management, value stream mapping is used to;

Depict the relationship between multiple departments/functions that contribute to the production process and supporting functions for example materials management, production planning, scheduling and more.

Map out the flow of materials and channels of communication (information) throughout the production process. It's good to note that in-process material and coordination are typical courses of significant waste in most un-leaned businesses. VSM offers managers a tool for visualizing and recognizing these limiting factors.

How to Develop a VSM Map – A Step by Step Guide

A quick note: In a manufacturing firm with numerous products, it's good to perform a product family analysis which is basically a review of the various products and the production process involved. However, if the product lines are too many, it might not be viable to analyze each product. Apply the principles of Pareto analysis to determine which products are worth mapping (either on the basis of value, volume or both). Pareto analysis helps in grouping of products with similar characteristics, making it possible for the VSM team to focus on a family of products with similar characteristics or on a single product.

The figure below gives an illustrative example of a current state VSM, assuming a winery. It is followed by a short discussion of the main components of the map. 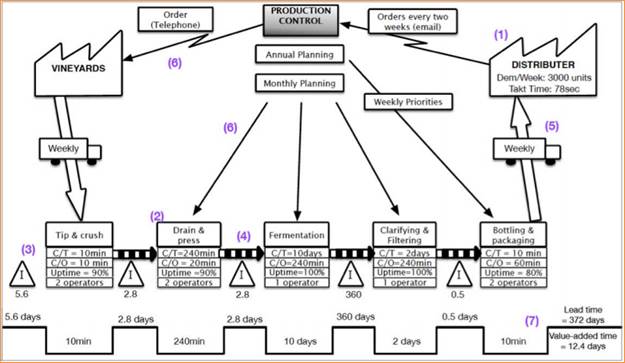 As shown in the diagram, the VSM of a winery can be mapped in a standard order using pre-defined icons;

1.    The distributer (customer) and the firm's suppliers are represented by factory icons. Information about the production demand from the distributor is recorded in a data box around the icon.

2.    The main manufacturing processes of the winery are depicted using a process box. In VSM, a process is defined as a single area of resource (material) flow. Therefore, a process ceases, (and another starts) wherever production is disconnected and flow of material stops, causing accumulation of stocks between successive work stages. A process box must record the following data for the specific process;

3.    Accumulated stock (both prior to and after the process) is depicted using a triangle, and the exact amount underneath (either in terms of days worth of stock or units of stock).

4.    The push transfer of stock from a process to another is depicted using a striped arrow.

5.    Transfer of final product is depicted using a broad arrow.

6.    Exchange of information between the business management process, suppliers and customers is depicted using 2 types of arrows;


7.    Finally, timeline (shown below the VSM) summarizes 2 vital performance metrics of production: the production lead time and the value-added time.

NB: Ensure you identify the true cause of "WASTE", not just the symptoms, of all the identified limiting factors.

NB: The trick is to implement the changes in small increments with adequate time between successful changes to establish the realized benefits gained from each change.

1.      First In First Out – FIFO means that the oldest inventories are sold first.

2.      Lead time – The time between the beginning and the end of a production process.

Normally, materials and/or parts are made and then they are sent to the workspace where they are, or maybe needed next (the next step in production or warehouse - inventory). As such, traditional production set up "Pushes Materials" through production resulting in build-up of stock (one of the 7 wastes that lean manufacturing seeks to eliminate).

Lean management seeks to eliminate inventory, and it advocates for a pull production system.

2.    Push manufacturing encourages management to maintain stocks. The stocks are then pushed into the market through distributors. The distributors then supply the products to the retailers. On the contrary, lean production supplies the product directly to the external receiver (the consumer). Inventory is discouraged. However, a middleman may be needed (for instance, a car dealer in case of a custom built car).

3.    Planning for push production relies on complex factors such as competition, market prices, time taken to get the production to the customer, additional production needed to meet the extra demand arising from an advertising campaign that has been launched, inventory levels and more. Therefore, the planning is complex and in most cases, it requires enterprise planning tools. On the contrary, pull production is easy to manage because it's based on market demand. The exact figures are known, making production planning easy.

4.    In push production, production and sales cycle are viewed as different processes. In a pull system, the two are intertwined because production is only done in response to current demand figures.

6.    A lot of waste is generated in push production system, especially waste of inventory and waiting. The primary goal of lean production is to eradicate all forms of waste.

7.    Mass production workspaces are characterized by heavy machinery. The machines normally work in shifts. On the other hand, pull oriented work spaces may not feature heavy machines. Effort is made to use compact, easy to set up and movable machines.

The primary objective of lean manufacturing is to:

The primary principle of pull manufacturing is production should only be done when required.

The goal of this rule is to avoid accumulation of inventory; WIP or goods that have been produced but are not needed in the market. This eradicates the waste of Inventory.

Material that is received pre-maturely promotes build-up of inventory. Also, it overburdens the material receipt workspace.

This is because everything that is produced represents an investment of money and time. The longer it remains unused, the longer it will take to recoup the money, and while in store, it uses up space.

This rule forces managers of various work centres to produce only that which is required; the moment the maximum amount of production has been attained, production ceases.


Kanban, The signal for work in a pull system

This refers to a signal sent from a certain work centre to the one that supplies it with materials, requesting for a defined action. If work centre B sends a Kanban requesting 4 parts from work area A, Kanban A will produce and ship only 4 parts; no extras, no shortages. For instance, if a milk man is part of Kanban system, if he sees an empty bottle, he will replace it. If he sees two empty bottles, he replaces both. If he is not seeing any empty bottles, he stops and does nothing.

For example, in our milk man illustration, if the milkman receives two bottles, a white and brown one. He will replace 1 chocolate milk bottle and 1 normal milk bottle. NB; the colour of the bottle signals the type of milk that he or she should replace.

For example, if the milkman added a bottle every time he had time to do so, the specific work area would run out of space to store the excess milk pretty quick.

Kanban coordinates the entire production system by linking work areas together. However, Kanban give rise to idle workers.

There are not hard rules for Just in time manufacturing. It assumes you will do what you ought to, to avoid compromising the project. However, there are 8 rules that managers must follow for a pull system to work properly;

1.    Don't produce beyond the Kanban ceiling.

2.    Materials must move following a Kanban

5.    The customer should pull the materials from the supplier;


6.    Only active materials should be at a work station

7.    Everything has its own place and there is a place for everything