1.    Six Sigma – A Data-driven method or approach for eliminating waste in an organization process

3.    Brainstorming – A group creative technique through which efforts are put to find the best solution for a certain problem through gathering a list of ideas contributed by group members.

4.    Parameter – A measure or numerical factor that sets the condition for implementation.

5.    Lean – An approach to running a firm that support the idea of continuous improvement.

PDSA was invented in 1920 by Mr. Walter A. Shewart, a statistician and one of the founders of the famous Bell Laboratories in New York. Walter introduced the notion of Plan, Do, and See. In the 50s, Edward W. Deming, a Total Quality Management guru and a well-known statistician, modified the cycle to: Plan, Do, Check, and Act.

Unlike the human intuition, PDCA offers a systematic way of knowledge acquisition and implementing change. Adopting the PDCA cycle increases employee's process knowledge, widen-decision making options, and boosts the probability of sustainable long-term progress. Its key benefits over the human nature are highlighted in the table below:

When to Use PDCA

PDCA implementation is a 12 step cycle – see the diagram below: 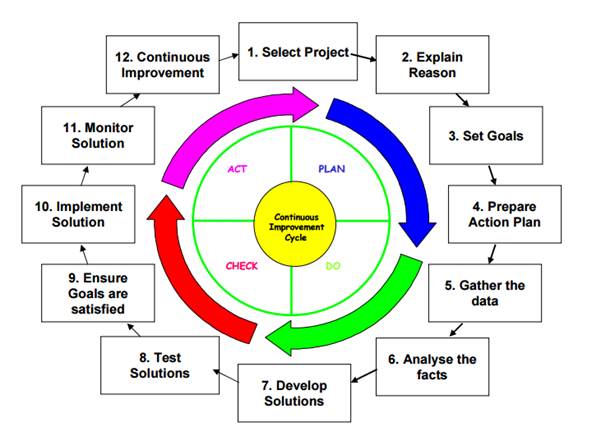 At this stage, the team leader should produce an agreed, well defined problem statement that gives stats and facts, but doesn't talk about possible countermeasures.

After process A has been completed, the operator is required to inspect the product, and then certify in SAP that the work has been effectively completed.

Interested in learning more? Why not take an online class in Kaizen - An Introduction?

However, the operator on process B has been complaining that 30 percent of the time, products arrives without having the right certification, which stops his team from doing their job. He is forced to stop for about 3 hours to sort the problem.

Process B manager posits that the problem has escalated since they updated the SAP version from II to III. Therefore, the reasons can be explained as follows:

Set SMART goal. For example, using the above example of process A and B:

Develop a specific action plan to guide implementation. The aim is to ensure that the plans are time-bound and implemented by the right individuals. Consider the following questions:

Collecting data allows the team to understand the present situation and extent of the problem. Data gives the information needed to analyze an issue.  It is vital to use the right tools to define your problem. Only then can the appropriate data be collected in the right form to enable solutions to be generated and their efficiency reviewed. Depending on the problem the PDCA team is trying to define, data can be collected in a number of ways:

Here are some factors you should consider when planning data collection:

The table below shows the most suitable tool to use for various problems:

Based on the findings from the data analysis, develop countermeasure or solutions by brainstorming all the probable root causes of the problem. Note that the most viable solution is the one that not only solves the problem now, but prevents it from recurring.

It might be helpful to start with brainstorming, grouping the possible solutions, prioritizing, and then asking the 5Whys.

Here are a few tips for brainstorming:

Illustration: How to use the 5WHYs!

Q1: Why has the equipment stopped?

Q2: Why did the Overload trip?

Q4: Why is the oil pump defective?

Q5: Why is the oil shaft worn?

Once you have identified and prioritized the solutions, you need to test them to assess their effectiveness. Think about how you can review their success.

You need to assess the success of the solutions by comparing their impact with the goals you had set in step 3.

The figure below shows the entire PDCA Cycle. 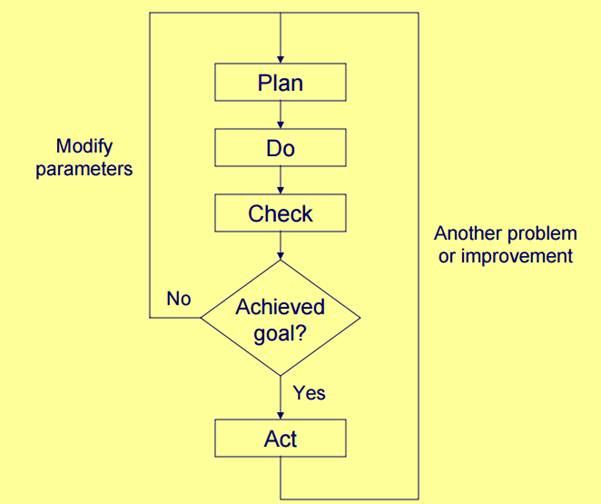 If the goals have been satisfied, the solutions can be adopted; if not, consider the following:

Note: Redefining your goals means a return to the third step.

You should ensure that all measures are taken to ensure that the solution becomes a success and thus the new standard.

You need to remember the following:

Monitoring the solutions involves a continuous gathering of data as well as an analysis of the facts to monitor the efficiency of the adopted solutions. Repeat the fifth and sixth steps of the cycle to establish the before as well as the after situation of the firm.

Don't forget to share your findings. The people involved in the PDCA team as well as those working in the concerned process need constructive feedback after adopting the solutions to help them maintain a continuous improvement.

Though defining the cycle of improvement, the standards of improvement keep on rising and never stop. You can use continuous process control measures to ensure that the performance of the solutions consistently satisfies the goals set. Improvement is infinite.

1.    Potential improvements are identified and analyzed, either because the employees have proposed a new way of doing things, because problems have been identified, because the market provides more effective machines that might save costs, etc.

2.    The probable improvements, as well as effects, are studied. The organization chooses the improvements that can be successful and they decide to adopt them in a small-scale test program.

3.    Once finished, the test program is evaluated to see if it is effective: Is it working correctly? Is it achieving the desired result? If the changes are not successful, the organization may decide to modify the process or design another one.

4.    Finally, if the outcomes are satisfactory, the changes are implemented on a large scale in the organization.

Once the changes are fully implemented, production will be more effective and efficient.

Example of Businesses that Use the PDCA Cycle:

The art of solving problems is constantly being evolved and re-branded by people in different industries. However, although the new methods might be more effective in certain situations, PDCA remains one of the most trusted, and  tested method of identifying and solving issues. The cycle is simple and practical enough to deal with different problems from the simplest to the most complex.

One of the major firms that consistently use PDCA cycle is Toyota. Toyota has shown that a more effective and rapid use of the PDCA cycle result in a dramatic decrease in post launch engineering variations (see the graph below). 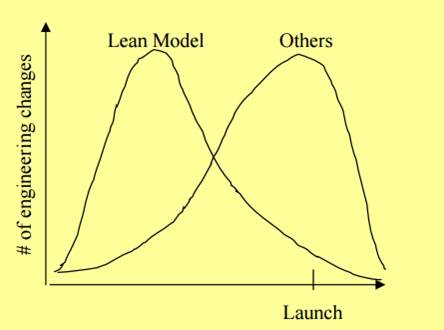 Another firm that has embraced the PDCA cycle is the Aluminum Foundry. The firm, a manufacturer of aluminum sand castings, performs PDCA on a yearly basis from bottom to the top. Tasks and metrics are developed to meet the set goals. Status of the metric is either green (effective), yellow (need improvement), or red (non-effective).

On a daily or weekly basis, different teams present their checks (metrics) and plans. These metrics are reviewed on a quarterly basis, and those that have failed are examined for root causes and new plans are developed to facilitate attainment of annual goals.