Even before you could count on your fingers, you counted objects. For example, if you had six little cars you played with every day, you knew when one was missing. How did you know? You knew what each one looked like: you knew there was a green one, a blue one, a red one, a red and yellow one, etc. When the black one with flames on the side was missing, you may not have known that there were only five cars, but you certainly knew that one was gone! This is a very basic type of one-to-one correspondence – one car corresponds to one color or color combination.

When you started counting on your fingers, each finger corresponded to a number. You always said "one" when you put your index finger up or pointed to it (for some people "one" is the thumb). "Two" was the next finger, then "three" and so forth until you got to the last finger which was "ten." Each finger corresponded to the same one and only one number each time. This is known as one-to-one correspondence.

In the same way, the points (dots) on a number line correspond to one number:

From this point on, the word ‘number' will mean one of the real numbers. Technically, we can distinguish between "number" and "numeral" as follows. A numeral is the written representation of a number: when you write 0, 1, 2, and so on, technically you are writing numerals. A number is the value represented by the numeral. Although these terms, therefore, actually have different meanings, we will often use them interchangeably, unless otherwise noted.

It is important to look at digits when we learn about place value since place value is the value represented by a digit with respect to its placement in the numeral. Let's consider 538. As five hundred thirty eight, we understand the ‘5' means five one-hundreds or ‘500,' the ‘3' means three tens or '30,' and the ‘8' means eight ones. Likewise, 4279 is really ‘4 thousands,' ‘2 hundreds,' 7 tens,', and ‘9 ones.'

The place, or position, of a digit in a numeral tells us the size of the group to which the digit refers, while the digit itself tells us how many of these groups there are. This will become extremely important when we start subtraction. It will take on new meaning when we look at decimals and understand the decimal system.

A number sentence is a way of showing that two expressions have a relationship. In this case, the two are equivalent. In the example, one expression is "3 cats" and the other is the picture of the three cats. An "equals" sign (=) is used between the two expressions to mean ‘is equivalent to.'

A number sentence could have a different sign to express another relationship between the expressions:


A symbol that holds a place for a numeral in a number sentence is called a placeholder, or variable. Often, the variable represents an unknown quantity which needs to be calculated using the other parts of the number sentence.

Or, we could say that 2 tens and 6 ones is equivalent to □

The box □ becomes a placeholder or variable. Because it is cumbersome to stop and draw a box, we often use a letter for a variable such as:

The replacement for the box or the letter x that makes this number sentence true is '26.'

A number sentence that contains a variable is called an open sentence. One that does not contain a variable, whether it is an equality or inequality, is either true or false.

There are three equations which are true for all numbers. Because they are like ‘laws of numbers,' we refer to them as axioms. You will also see them referred to as properties of equality or properties of numbers.


The reflexive axiom or reflexive property tells us that any quantity is equal to itself.


The symmetric axiom or symmetric property says that if one quantity is equivalent to another quantity, you can switch which side of the equals sign they are on. 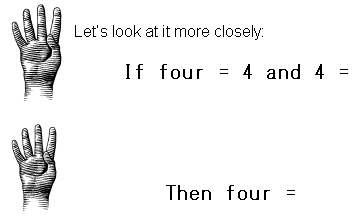 How to Use a Calculator

How to Teach Phrasal Verbs to ESL Learners