My Classes
What is Adobe Premiere Pro?

Adobe Premiere Pro is a video editing program that is part of the Adobe Creative Cloud software collection, as well as Adobe CS6 – or Adobe Creative Suite. Premiere Pro is used to edit videos, including movies, and is quickly becoming the go-to program for filmmakers all over the world, both amateur and pro.

When you're talking about film and video editing, there are two types of editing processes: linear and non-linear. Linear video editing was the way video was edited before digital video recorders and cameras became the primary way of shooting film.   In linear editing, you would scrub through the footage by dragging the playhead in the program you were using to make the edits. You would select, arrange, and edit images and sound in the sequence of the footage. In other words, you had to "roll" through the entire film to find the place where you wanted to perform edits, then make those changes. The edits that you made changed the original version. In fact, you could say the original version was destroyed.

Non-linear video editing, on the other hand, allows you to go directly to the frame where you want to perform edits. Premiere Pro is a non-linear editor. You will start by capturing or ingesting content, then cut that content into pieces. You will be able to split clips, add filters and effects, and trim frames.   However, Premiere Pro doesn't change the original footage, which is why we say it is non-destructive.   The age of digital media, as opposed to reels of tape, helped make this kind of non-linear editing possible.

Adobe offers users two ways to purchase and use the Premiere Pro program.   Users can either purchase the software for a one-time fee by download or ordering the program CD, or they can subscribe to Premiere Pro by agreeing to pay a monthly fee.

Premiere Pro CS6 is available on CD for those who wish to pay a one-time fee to use this software.   When purchased in this manner, users will be able to use Premiere Pro CS6 for as long as they wish, without having to pay any other associated fees.   Since Adobe cancelled its plans for releasing a CS7, CS6 will be the last version that can be bought on CD, at least for as far into the future as Adobe can see, and for a one-time fee.

Premiere Pro CC, or Creative Cloud, is a subscription based service, which means you will pay a monthly fee to continue to use the program.  You can discontinue the service at any time. There's no contracts or time commitment required.   Premiere Pro CC is installed on your computer just as CS6. The main difference lies in that if you have not paid a subscription fee for the month, you will not be able to use the program until you do.

Differences in CS6 versus CC

The differences between Premiere Pro CS6 and CC are found in the features. Premiere Pro CS6 was released in 2012. Even though it remains the most recent Premiere Pro Creative Suite release, it is still two years old.   Updates to CS6 have been released, but these updates were only to fix bugs that affected the performance.   No new features have been added. Since plans for CS7 have been scrapped, there won't be an updated Creative Suite version.

In the two years since the release of Premiere Pro CS6, Adobe has poured all its energies and technology into Premiere Pro CC. Adobe updates all of its cloud-based programs every three to six months instead of every 12 to 18 months as they did with the creative suite programs. Because of this, the cloud-based version of Premiere Pro contains more features and is more up-to-date with technology than CS6.

In fact, CC already has features that CS6 does not.   These include:

Again, these are all features that have been added to Premiere Pro CC, and they are features you will not find in CS6. However, we are not trying to discourage you from using CS6 if you already are – or plan to in the future. CS6 is still a highly functional and effective program.   That said, for those who like to take advantage of new features and prefer to use the latest version of software programs, Premiere Pro CC will be the best choice for you.

If you're an experienced Premiere Pro Creative Suite user and have upgraded to CS6 from a previous version, such as CS5, the new features contained in CS6 will be helpful to you.   We've listed some of the most critical upgrades below so that as you start to use Premiere Pro CS6, you will be sure to watch for these improvements.

Adobe is to graphics and video what Microsoft is to data. In other words, Adobe offers more than several different software programs to help you create and edit graphics and video. That said, you can use other Adobe programs in conjunction with Premiere Pro to make your job easier – and achieve a better end result.

The Premiere Pro's interface can be daunting to try to navigate if you have never used the program before.   There are dozens of panels that you can use. That's on top of hundreds of controls. However, you can customize your workspace using tabbed panels so what you need to use is quick and easy to find.

As you can see in the screenshot below, the workspace has four main panels. 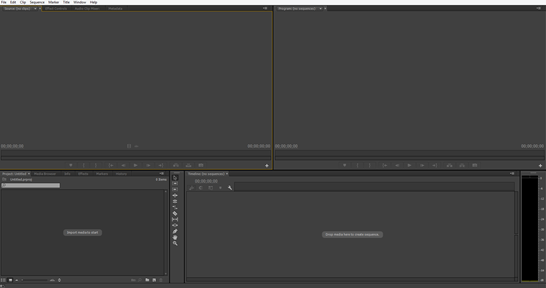 Let's talk about each one of these.

At the top left is the Source Monitor panel. 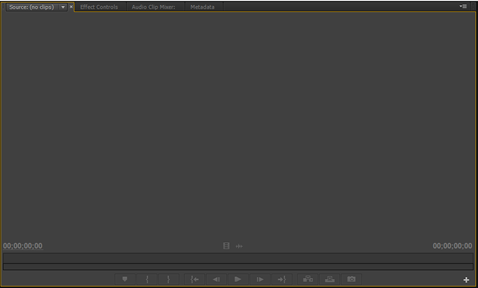 This is where you will be able to preview content before you add it to a project.   You can also find the Effects Control panel, the Audio Clip Mixer, and the Metadata panel here.   These are located at the top of the Source Monitor panel. You can see them below:

The Project panel is located at the bottom left of the workspace.   Located here are the building blocks that you will use to create movies. It contains all source clips and sequences. The other panels included with it are the Media Browser, the Info panel, the Effects panel, the Markers panel, and the History panel. 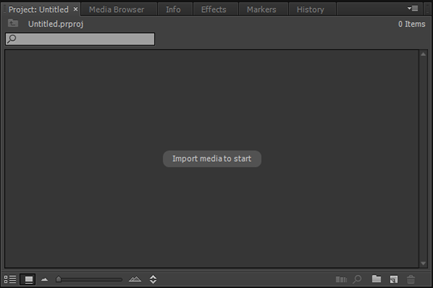 On the bottom right of the workspace, you will see the Timeline panel.

The Timeline panel is where you will assemble different aspects of your project, including audio, video, and still-image.

You will see what you have produced in the timeline in the Program Monitor. This tab is located at the top right of the workspace. 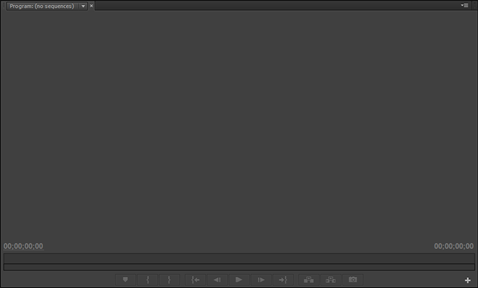 If you accidentally close a panel, you can go to the menu bar the top of Premiere Pro. It is shown below.