My Classes
Adobe Premiere: Creating Video Effects
You can use effects to correct color and brightness; however, they can also be used to add animation, produce overlays, and create greenscreen effects.

In this article, we will learn about:

When you want to edit effects, you go to the Effects workspace, which is made up of the Effect Controls panel, the Program Monitor, and the Effects panel.

To reach the Effects panel, go to Window> >Effects.

You can see the Effects panel in the snapshot below. 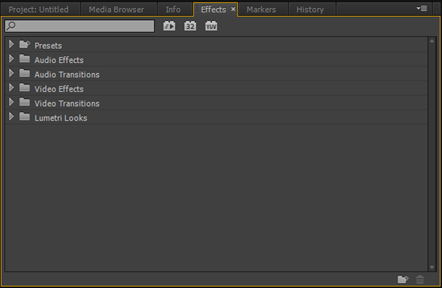 Adding an Effect to a Clip

To add an effect to a clip, drag the effect from the Effects panel onto the clip on the Timeline.

As an example, we are going to drag the Edge Feather effect to our clip.

You can also select a clip in the Timeline, then double click on the effect in the Effects panel.

Once you have added an effect to a clip, you can go to the Effect Controls panel to customize it.

We added the Twirl In effect to a clip. 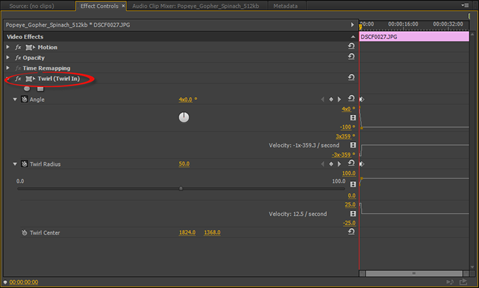 By going to the Effect Controls panel, we can adjust the effect by changing the values and parameters.

Toggle an Effect On or Off

To toggle an effect off, click the fx icon that appears to the left of the effect name.

When you do this, the effect is disabled.

To turn the effect back on, click the fx icon again.

Changing the Order of Effects

The order that effects will appear on your clip is shown in the Effect Controls panel.

To change the order of effects on the clip, drag an effect up or down in the Effect Controls panel.

You will see a horizontal bar to let you know where the effect will be placed when you release the mouse.

To remove an effect in the Effect Controls panel, select the effect.

Next, either press the Backspace or Delete key on your keyboard.

You can also right click on an effect, then choose Clear.

To remove an effect in the Timeline, select the clip or clips, then right click on the clip and select Remove Effects.

You will then see the Remove Effects dialogue box. 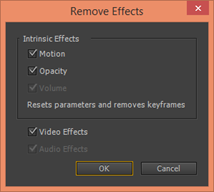 Check the effects that you want to remove.

Now we are going to use keyframes to animate effects that we have applied to clips in the Timeline.

To add motion to effects using keyframes, start out by adding the ProcAmp effect to a clip in the Timeline.

Next, move the playhead in the Timeline to the start of the clip.

Go to the Effect Controls panel. Click the triangle to the left of the effect to see the configuration options, as pictured below. 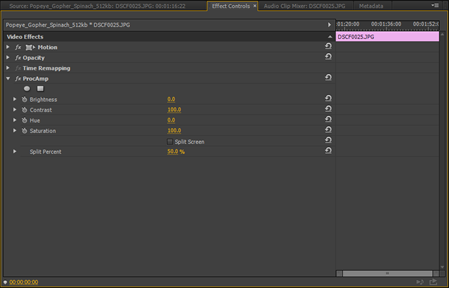 Click the Toggle Animation button to the left of the effect that you want to configure so that keyframes are enabled.

Interested in learning more? Why not take an online class in Adobe Premiere?

We are going to click the Toggle Animation button to the left of Saturation. 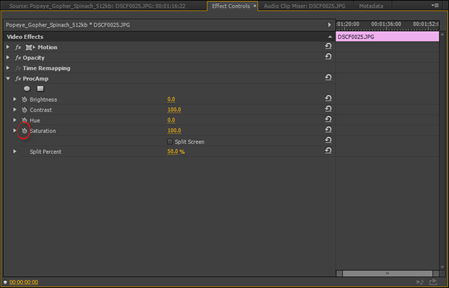 Now adjust the value for Saturation. We are going to adjust ours to 0. 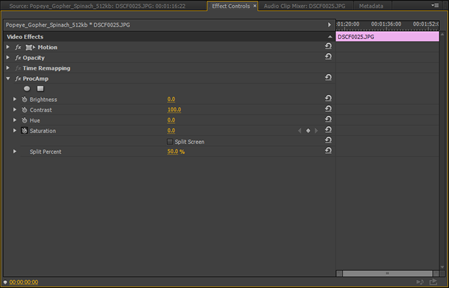 Now, move the playhead to the second location so you can set the keyframe for the second effect.

We are going to move our playhead toward the end of the frame and restore Saturation to 100.

With the keyframes added, our clip starts out as black and white and turns to color.

Needless to say, you can spend a good bit of time selecting the right effect for a clip, then perfecting it using keyframes.   Wouldn't it be nice if you had a way to copy that effect and keyframes so you could apply it to other clips in your current and future projects?

The good news is you can by creating a preset that you can drag onto a clip in the current project – or even a future one. We are going to show you how to do that.

As our example, we are going to copy the effect and keyframes from the last section when we had our clip go from black and white to color.

To copy the effects and keyframes from a clip, go to that clip in the Timeline.

Next, go to the Effect Controls panel.

Select the effect that you want to copy, then right click and select Copy. 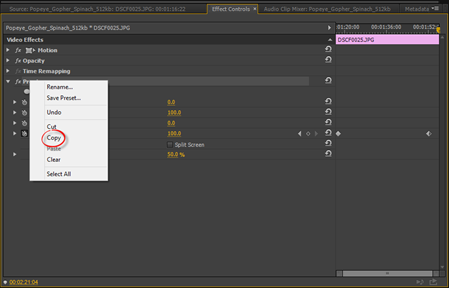 Now, go back to the Timeline and select the clip you want to paste the effect onto.

You can also create an effect preset to that the effect you created can be used in future projects.

To do this, click the clip that contains the effects in the Timeline.

Select the effects that you want in the preset, then right click and select Save Preset. 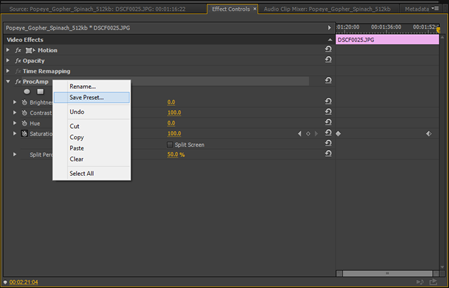 You will then see the Save Preset dialogue box. 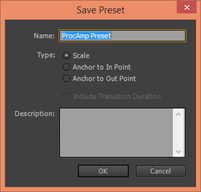 Type in a name for the preset, then choose a type:

You will be able to find the preset in the Presets folder in the Effects panel.

Compositing is defined as combining two images in a scene and making it appear as if they were shot together.

The Ultra Key effect in Premiere Pro makes keying really easy. However, here are some things you can do to make it even easier for you:

2.        Use a camera that does not interpolate to attain HD resolution. HDV cameras do this.

5.        When you record your footage, record in progressive instead of interlaced format.

8.        If you are filming one subject, such as a person, use a tripod L bracket and mount the camera vertically for higher resolution and higher pixel density around the subject.

For keying, you will record your subject with a certain color background, usually green. You will want to make sure the subject does not wear any green so parts of the wardrobe are not cut out.

Create a sequence using your greenscreen footage that you shot with your camera by dragging it to the New Item button in the Project panel.

When you do this, you will be able to see the footage in the Program Monitor.

At this point, you can rename the sequence if you want and even organize it in a bin.

Next, go to the Effects tab.  Find the Ultra Key effect by typing "ultra" in the search box (in the Effects panel).

Now drag the Ultra Key effect to the clip in the sequence.

Keying Out a Color

To key out a color (green for greenscreening), go to the Effect Controls tab.

You will see the Ultra Key effect. 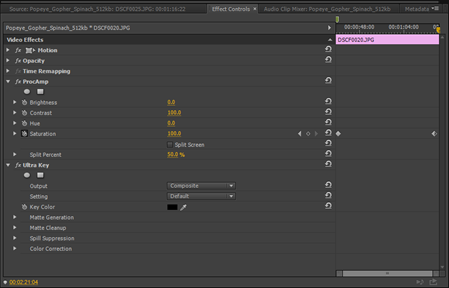 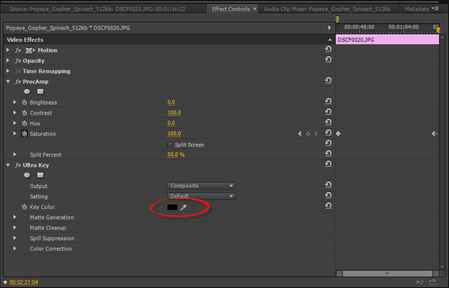 Use the eyedropper pointer to select the background color in your clip showing in the Program Monitor.

When you do this, the background color changes to black. If you had a green background, it would now be black.

Next, go to the Effect Controls panel again. 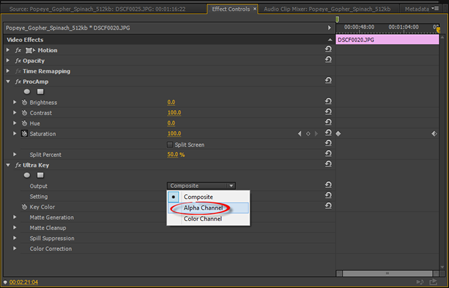 Now your video clip is a black and white clip.

We are selecting Aggressive. You can try each preset to find one that works best for you. 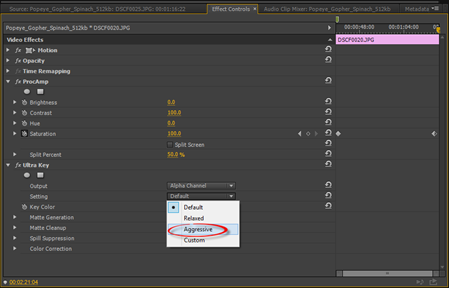 Next, click the triangle to the left of Matte Generation.   You will then see Transparency, Highlight, Shadow, Tolerance, and Pedestal. 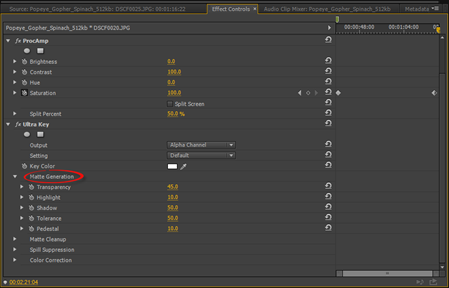 These will adjust how the matte is interpreted.

Once you are finished with all the adjustments, select Composite from the Output menu.

You will then see the key in the Program monitor.

Next, move the keyed clip to Track V2 if it is not already showing there.

Drag the background to V1. Your background should always be on a lower track.

Right click on the background. Select Scale to Frame Size.

When that is finished, select the video clip in the Timeline.

Click the triangle to the right of Motion Controls. Now you can adjust Position, Scale, and Rotation.

Cleaning Up the Edges around a Key

You can remove unwanted edges around a greenscreen key by using a garbage matte.

To use a garbage matte, go to the Effects panel. The garbage matte effect is found in the same folder as the Ultra Key effect.

Drag and drop one of the garbage mattes onto the keyed footage. 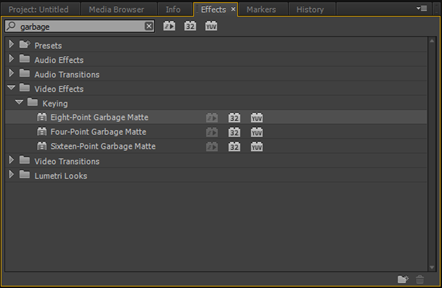 Drag the effect onto the foreground clip.

Next, go to the Effect Controls panel.

Go to the Garbage Matte effect. 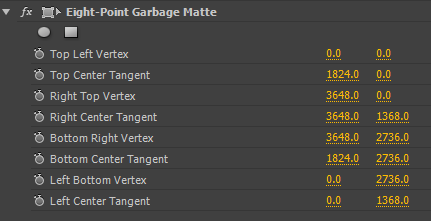 We chose an Eight Point Garbage Matte, so we see eight handles appear around the footage.

Grab a handle and bring them in (one handle at a time) until it is like you need it to be.

When you are finished, click an empty space in the Timeline.