We will discuss how to:

Animating objects in After Effects is not difficult once you understand the simple steps. For example, you can take any object in a composition, then make that object move across the screen by simply creating keyframes.

Let's show you what we mean.

Below is a snapshot of our composition.

To do that, we are going to go to the Timeline panel. 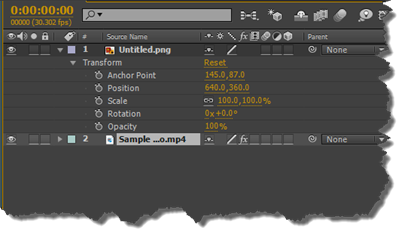 Make sure your playhead is at the beginning of the time ruler. If it is not, click Home.

Next, click the stopwatch beside Position, as circled below. This will add a keyframe. 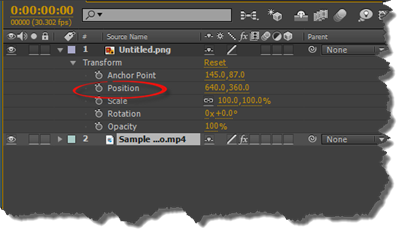 Now move the playhead to the location in your Timeline where you want to add the second keyframe. The location of this keyframe will be where the animation (which happens to be motion) ends. Once you move the playhead, adjust the values for Position.

As you can see below, the spaceship was moved in our composition.

Move the playhead back to the beginning by hitting the Home key, then press the spacebar to view your animation.

You can also create rotation, scale, and opacity animation by following these exact same steps.  By using keyframes and increasing the scale value, you can make it seem like the camera is zooming in.

In addition, you can create parent/child layers as we did with text to animate several layers at once using the same animation.  This saves time as you work on your composition.

Trimming Layers Using In and Out Points

There may be some layers that you only want to appear in certain parts of your composition. For example, perhaps we only want the spaceship layer in our composition to appear at the beginning as part of the introduction to our video.

You can also drag the layer duration bar to change the Out point. Just click on an edge of the colored bar to the right of the layer name in the Timeline pane and drag it.

To set an In point, or the first frame where a layer appears, follow the same steps listed above for an Out point, except press Alt+[.   You can also drag the layer duration bar.

The layer duration bar for our top layer is circled below.

The anchor point for a layer is the center of the layer by default. It determines the point from which the layer scales or rotates.

To change an anchor point without moving the layer, click Y to use the Pan Behind tool.   You can also click on this tool in the Tools panel.

Drag the anchor point to where you want to place it.

The anchor point is circled below.

You can apply animation by using keyframes and adjusting the layer's properties, or you can use the animation presets that After Effects provides.

Since we already showed you how to animate using keyframes, let's learn how to use presets to create animation.

To start, select the layer you wish to animate.

Interested in learning more? Why not take an online class in Adobe After Effects?

Once again, for our example, we are going to use our spaceship.

This opens the Open dialogue box.   Go to the Presets folder, as circled below. 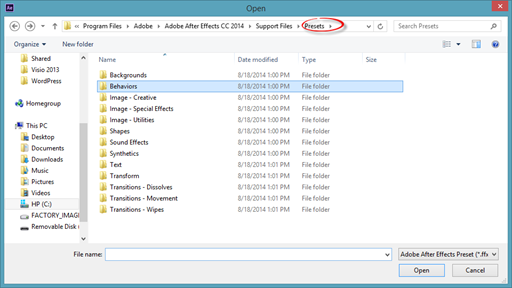 Now we can select a type of animation. We are going to select Behaviors. 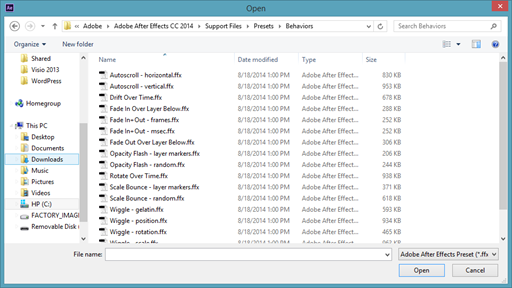 We are going to select Rotate Over Time.

Press the spacebar to see the animation. When you are finished watching the preview, click the spacebar again, then the Home button to return the playhead to the beginning.

Next, go to the Effects Control panel. 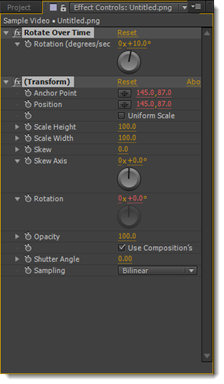 You can adjust the values for the different animation properties.

You can also create keyframes.

Let's say we want our spaceship to grow taller at a certain point in our composition.   We would move our playhead to the location where we want it to start to grow, then click the stopwatch beside Scale Height in the Effects Control panel.

Next, we move the playhead to the next location, then adjust the value for Scale Height.

You can see our keyframes below.

Our spaceship would rotate over time because that is the animation preset we applied.   However, there would also be an animation that shows it growing in length.

As you can see, you can apply animation presets, then further customize the animation by adding keyframes.   Adding keyframes in After Effects is always as easy as clicking the stopwatch and moving the playhead.

An Introduction to Adding Effects

In addition to animation, you can also add effects using the Effect menu in the Menu Bar.

Let's say you want to add noise to a layer in your composition.

First, click Home to move the playhead to the beginning, then select the layer in the Timeline panel. 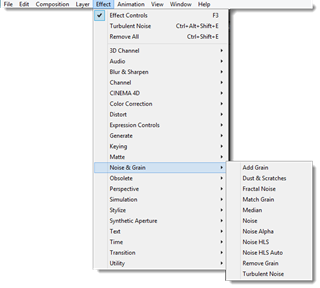 Select the noise effect you want to add from the menu.

We are going to choose Turbulent Noise.

To customize the effect, go to the Effects Control panel. 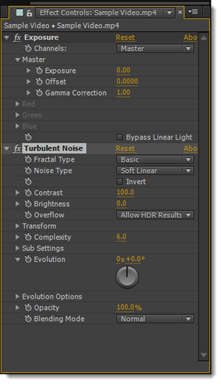 We want to change the Fractal Type to Small Bumps and increase the brightness.

We also want to adjust the opacity.

By using keyframes to animate the opacity, we created another animation that made it look like the clouds were clearing over time.

Take the time to experiment with different effects, as well as adjusting and animating their properties. Pay special attention to the Generate and Simulation effects. These allow you to add effects such as lightning bolts, snow, bubbles, and etc. to your layers.

There are many tools and controls in After Effects that can be used to adjust or change the color in your compositions.  You can use those that automatically adjust the color, and there are those that give you the ability to make the changes yourself so you can get the look you want. 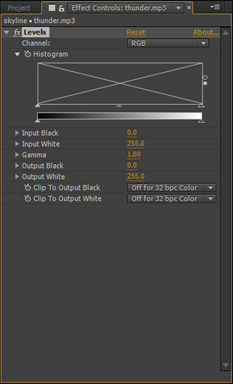 We are going to choose Red and apply adjustments to the image below.

In the Effects Control panel, you can adjust the sliders for the color channel. 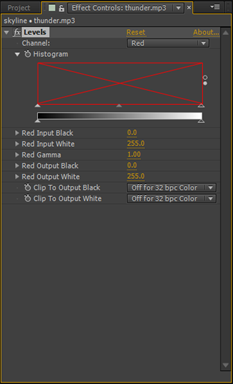 Take some time to play with color balance in your composition.   If you do not like a change that you made, go to Edit>Undo.   Since each composition you work on will be different, the best way to learn how to adjust levels is to practice doing it.   The more practice you get, the easier it will be to know what you need to do.

The Color Range effect will "key out" a range of colors. In the composition pictured below, we are going to key out the blue sky.

To do this, we are going to select the layer in the Timeline panel, then go to Effect>Keying>Color Range.

You will then see the Composition Settings dialogue box. 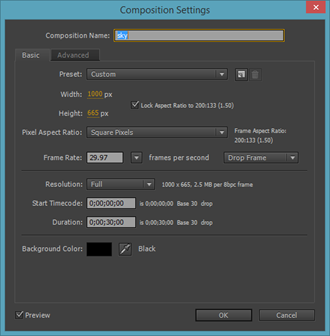 Go to the Background Color box. We are going to use black. This is the color that will show through as we remove the colors we do not want.

Select RGB from the Color Space menu in the Effects Control panel. 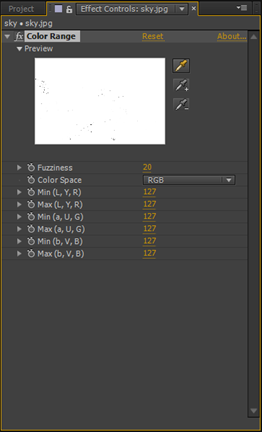 Go to the Key Color eyedropper. 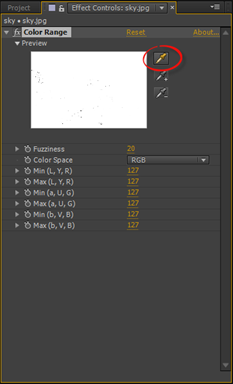 Click a color in the sky to sample it. This is the color we want to key out.

As you can see, the keyed out color now is replaced with black in the Composition panel. Remember, we selected black as our background color for the composition.

Now click on the Add to Key Color eyedropper located in the Effects Control panel.

Click another area of the sky in the Composition panel. 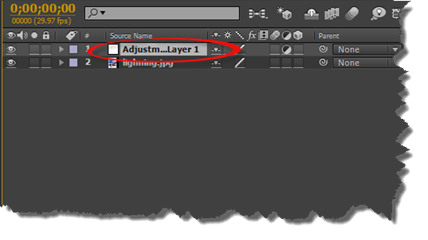 Keep doing this until the sky is keyed out.

As you can see above, the blue sky has been completely keyed out. Now we can add a new background.

Import the footage if you need to, then drag it to the Timeline panel.

Next, let's reposition the new layer.

Click the triangle beside the layer, then adjust its Position and Scale Properties to reposition it.

Below is our composition with the new background. 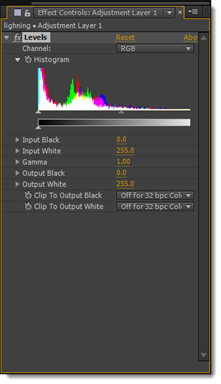 Now we can go to Effect>Color Correction>Auto Levels or Effect>Auto Correction>Auto Color to adjust the color in the new background layer so it better matches the original layer.